ATLATL A weapon launcher used by primitive man world wide tens of thousands of years ago. It predates the bow by decamillenia, and is probably older than the sling. 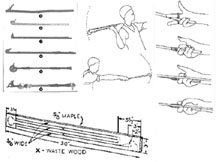 Many more references on the atlatl can be found at
Ted Bailey's atlatl page!

It was a thick strong stick with a groove, socket, or a hook (called a "ball") at its end. The butt-end of a spear is laid or fitted into the groove or ball, while the shaft is held by the hand or possibly another stick with a fork at its end. The atlatl then acts like an extension of the arm allowing the thrower to release the spear with much more energy (speed) than with the arm alone. My understanding is that in some cultures, for example Australian aboriginies, the spear is something more like a long arrow. In Neolithic times however, atlatls were used to hurl some pretty heavy shafts.

As the Atlatl evolved, the strong stick gave way to the more flexible stick, the groove to a spur (ball), and the heavy spear to a more arrow-like shaft held with the first two fingers of the same hand that grips the end of the atlatl. The result, thanks to the flex-and-spring-back of the more flexible stick, along with the flex and return-to-true of the arrow or dart, gave the arrow tremendous forward velocity, making the modern atlatl a weapon of vast hunting potential.

Here is an informal list of a few books that may be of interest courtesy of Marlo Brown. Here are a few references to contact in the event Ted's page is down.

Thunderbird Atlatl a new site catering to atlatlists with supplies, kits, and ready made atlatls! Nice pictures too!

Mr. Bob Perkins of BPS ENGINEERING is serious about making (and selling) high quality atlatls. Do check out his page...
Bob's sister, Sara Macfarlane is the editor of "World Atlatl Magazine", an atlatl and primitive skills ezine updated quarterly. Have a look and send her your experiences. Finally, I have prepared a review of Bob's atlatl, so do have a look it you are interested in these implements.

This relatively new page from The Atlatlist is really nice!

Chuck Butorajac, PA, and VA State Atlatl champion makes atlatls custom fitted to your own hand! This is a pointer to his catalog.

Red Wolf Crossing specializes in knapped products, and includes in this some nice looking atlatl darts of primitive style with detachable heads like those made many thousands of years ago! I understand he also makes a nice atlatl, but I haven't seen but a picture.

As usual, if anyone has any links, please pass them my way, like this artifacts page from Australia. Notice the "woomera", that's Australian for atlatl!

If anyone thinks the atlatl is totally obsolete, check this out...

--you may be interested to know that atlatls (in this case called nuqaqs) are still used by the Yup'ik Eskimos of the Lower Yukon River, Alaska. They use them to hunt bearded seals.
Oakley
Tundra Drums Newspaper
serving the Yukon-Kuskokwim Delta

Mail to mjr, goto survival, Primitive Weapons, or back to thrower