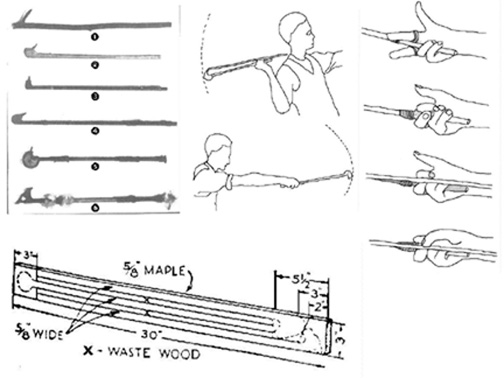 Here is a fascinating sport that requires little equipment and is quickly mastered - hurling arrows at a target with a homemade hul-che, or Indian throwing stick.

The hul-che was one of the weapons used by the ancient Mayas in Yucatan and other parts of Mexico and Central America. It is merely a stick with a protruding head or peg, which engages the end of an arrow. By means of the stick, the arrow can be thrown great distances, with surprising force and accuracy. Unlimited skill may be gained by practice; the exercise is a healthful one; and the sport becomes highly competitive when engaged in by a group.

The sticks illustrated are not copies of authentic Mayan designs, but represent a few of the many types that may be easily fashioned.

In the photograph at the left, showing a group of six sticks, No. 1 is made from the forked branch of a tree. The smaller branch is burned off to harden and round it so that it serves as a peg. The second stick is whittled from white pine, and the peg is a wood screw, which is rounded with a file after the head has been cut off. Slightly more elaborate is No. 3. It has an ebony peg, and there is a dowel peg through the handle for a finger rest. Cord is wrapped around the stick in two places for decoration.

Still better are the sticks marked Nos. 4, 5, and 6. These are made of maple and have turned ebony, bone, or maple pegs. They are painted in various colors and decorated with cord wrappings, leather fringes, and feathers, and have leather loops for the fingers. All three sticks can be cut from a piece of maple 5/8 by3 by 30 in., as shown in the diagram near the end of this article. The stock for the handles is 5/8 in. square. The heads may be cut to any desired design and the handles rounded off and dressed down to about � in. round. The sticks are then sanded, stained, and polished.

The peg in each case is about 1/4 in. in diameter, with a ball formed on the end. A ball will follow the concave socket in the arrow through a greater length of stroke than a plain, straight point. The peg may be set at any from 45 to 80 deg.

Glue the peg in a hole drilled in the head. Attach the finger loops and decorations with wrappings of cord such as chalk line. Pull the ends through under the wrappings to avoid knots. The wrappings may be stained with water colors and shellacked when dry.

Although arrows from 28 in. to 5 ft. in length may be used, the standard 28-in. target or hunting arrows obtainable at any sporting-goods store are probably the most practical. It is necessary merely to cut off the nock and form a round concave socket to match the end of the peg. If you wish to make your own arrows, you will find instructions in any standard book on archery.

The method of gripping the stick is illustrated in the accompanying series of four photographs. The second, third, and fourth fingers grasp the handle, while the first finger is folded up out of the way. Place the arrow socket on the peg and lay the shaft along the first joint of the second finger, holding the shaft in place with the thumb. Use only enough pressure to keep it from falling off.

Stand with the feet apart, the left foot forward and pointing toward the target, the right foot back and at right angles to the left, unless, of course, you are a left-handed thrower, in which case the position is reversed.

Draw the stick with the arrow in place straight back over the shoulder and execute a straightforward overhand swing. At the finish of the stroke, rock up on the right toes. Do not try to release the arrow with the thumb, as it is not necessary. If the thumb is pressed lightly against the arrow, but not lapped entirely over the top, the release will take place without conscious effort and at exactly the right time.

The throwing stick is by no means a toy. It has a range up to 500 ft., and the power is sufficient to inflict serious injuries. Use the same precautions as with archery. Be especially sure to have plenty of room when you first try out the sport. An archery target is most convenient to use, but any type of target in which the arrows will stick may be used.

Do not allow children to use the throwing sticks unless under adult supervision. If you regard it as a weapon and use reasonable care, you will find it quite safe and will soon develop considerable accuracy. Continued practice will bring greater skill and increasing enjoyment in this unique and healthful sport.

Click here for the FULL SIZED VERSION of the image above. It is 93K, just so you know!
Mail to mjr, goto Survival, Primitive Weapons, to Thrower, or back to the Atlatl page